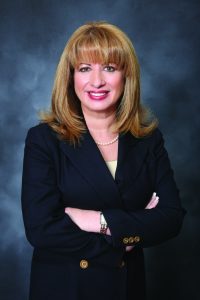 Lourdes Cortez is President and Chief Executive Officer of North Jersey Federal Credit Union (North Jersey Federal), the 9th largest credit union in the State of New Jersey with over $233 million in assets and branches in Totowa, Newark, Paterson, and Elmwood Park.

Over the course of her tenure as CEO since 2005, she has spearheaded growth from $168 million to $233 million in assets, which represents an increase of 32%. Deposits have also grown by 29%, total gross revenues have increased by 5% and the credit union’s capital/equity has risen by 30%. Lourdes and her senior staff attribute this extraordinary growth to a strategic emphasis on increasing the number of commercial accounts at the credit union. In 2015, North Jersey Federal is on track to open more small business accounts than in any other year since the institution opened in 1936. Over the past 5 years, there has been a steady growth of small business accounts ranging from 15% to 32% year-to-year.

Lourdes’ strong work ethic developed early while employed at a family-owned jewelry store at a young age. From the beginning, she learned that every work experience could help to develop strong leadership skills. She used this philosophy when she began her professional banking career at North Jersey Federal. She started as a Financial Services Representative in 1984 and later was promoted to positions with increasing responsibilities as a Mortgage Officer, Loan Department Supervisor, and Loan Collections Manager. In 2004, she was promoted to Vice President of Operations and soon thereafter became Senior Vice President. Lourdes was named President and Chief Executive Officer in 2005.

In her three decades at North Jersey Federal, Lourdes has participated with many community-related organizations through volunteering or making financial donations. As CEO, she furthered her personal belief into an organizational policy with an initiative called Operation Share & Care. Successes include partnering with Paterson’s John F. Kennedy High School to integrate a student-run branch of the credit union as part of its financial literacy curriculum. Mandated by the State of New Jersey, all schools are required to integrate financial literacy into their curriculums. Students enrolled in the Business and Marketing program are given the responsibility of operating the branch which is located inside the school. Successful graduates have gained valuable teller experience and are prepared for jobs in the banking and credit union industries.

In a concerted effort to grow Operation Share & Care and give back to the community, Lourdes took it to the next level and founded the North Jersey Federal Credit Union Foundation. Lourdes serves as the foundation’s chairperson and its philanthropic focus was established for two important reasons: to provide scholarships and resources to college students who choose to major in banking or finance both at the undergraduate and graduate level and to support non-profits within the local communities in which North Jersey Federal has a presence. Over the years, some of the organizations that have received support include Autism Radio, the Boys & Girls Club of Paterson and Passaic, Eva’s Village, the Marines Care Organization and the Boy and Girl Scouts of Northern New Jersey.

As the first Latina CEO of a credit union in New Jersey, diversity has always mattered to Lourdes, particularly since she has faced adversity herself. She makes it a point to lead the credit union with compassion and inclusiveness. This is evident in North Jersey Federal being the first financial institution in New Jersey to offer Islamic banking and Islamic banking products. In addition, the credit union’s website was one of the first of its kind to have both English and Spanish versions.

Recognizing the growth of the Hispanic population, her diversity initiatives include Spanish-speaking employees at every branch. She has also instituted a gay-friendly environment providing benefits to employees and their partners long before equal rights campaigns became popular in New Jersey. It is her personal mission that employees benefit from the success of the organization. Notably, North Jersey Federal is a place where staff can grow with the support of the credit union through its many educational programs, fun events, philanthropic initiatives, as well as having all their banking needs met. Additionally, she has created a family-friendly work environment that benefits working mothers and fathers. The credit union offers flexible work hours and schedules, and allows parents to bring their children to work in the event of emergencies when they cannot get child care.

In recognition of her leadership, Lourdes has been honored by: NJ Biz magazine, as one of the Best 50 Women in Business in NJ, North Jersey Regional Chamber of Commerce 2010 Star Award in Business, the 2010 Salute to the Policy Makers Award from Executive Women of NJ, and the 2012 Women of Achievement Award from the Girl Scouts of Northern NJ, the 2014 Woman of Influence award from the Commerce and Industry Association of New Jersey, and is a 2014 honoree with the Hispanic Business Council Scholarship Foundation of NJ. More recently. Lourdes has recently been recognized for the 2015 “Hope Saves the Day Award” for her efforts with both her personal time and financial support to the autistic community, particularly AutismRadio.com, the 2015 Brava Awards from SmartCEO and the 2015 CIANJ/Commerce Magazine Best Practices Awards.  Lourdes recently received a community service award from Paterson Team Hope.  This spring, she was recognized as by the Passaic County Education association as a “Friend of Education.”

Lourdes was recently appointed by the Federal Reserve to serve on the Community Depository Institutions Advisory Council (CDIAC). She serves on the Board of Trustees of William Paterson University in Wayne, NJ, a position she was appointed to in 2014. She also serves as the Chairperson of the Board of Directors for The Boys & Girls Club of Paterson and Passaic and is on the Board of the Workforce Investment Board of Passaic County.

Lourdes’ professional affiliations include being an active member of the Commerce and Industry Association of New Jersey, the Hispanic Chamber of Commerce and Education Credit Union Council and is a Member-At-Large for the Board of Directors of Executive Women of New Jersey.